Advanced Inventory is a subscription based add-on to QuickBooks Enterprise. It provides several more advanced inventory management features than are otherwise available in any version of QuickBooks without it. The next two posts, we will look at the tracking of inventory by lot numbers.

Lot numbers enable QuickBooks users to track goods they purchase and sell in sections or lots. This feature in QuickBooks Advanced inventory is helpful in this regard, but companies needing tight lot control may need to search for a more sophisticated system. 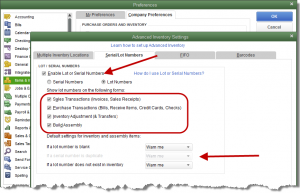 Note from the screenshot that the preference can be set to track either serial numbers or lots, but not both. The circled middle section allows several settings that govern which QuickBooks forms should show lot number data. The bottom arrow points to the setting that allows the user to specify whether or not QuickBooks should show a warning message when a transaction is created without the lot number information being included. Note this is just a warning message; QuickBooks will not prevent items from being purchased or sold without a lot number.

Once the preference has been set, a column for lot numbers appears on the forms specified in the setup. Lot numbers are determined at the time goods are purchased.

Creating the lot number is a simple matter of entering the characters at the time the item is purchased. Note that there can be no blank spaces and the number can be up to forty characters long. It may be helpful to specify a lot number format for each item.

Lot numbers are always optional. Even if the feature has been turned on, items can be purchased freely with or without lot numbers. 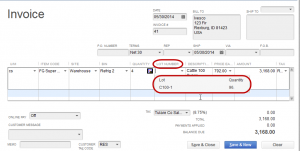 When selling an item, you can select which lot number the item is being sold from. Keep in mind, it would also be possible to sell this same item without entering any lot number at all. It is also possible to enter a lot number that does not exist in the system, and QuickBooks will allow the invoice to be completed with that information.

In both cases, no lot number or non-existing lot number, QuickBooks will give a warning message but will still allow the transaction. 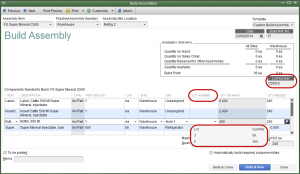 Lot numbers are allowed in the Build Assembly process. The top right highlighted area in the build assembly window allows the creation of a new lot number for the finished goods that will be completed in this build transaction.

The middle circled area is the column header for the lot numbers of individual components that will be used as parts of the finished goods, allowing the tracking of the lot numbers from which they came.

The bottom large circled area is the drop down for the immediately preceding row showing the lot numbers that exist and the quantities in each one. The component in the window with the shown two lot numbers, 3 and 6, is the bottle. We have 96 bottles in lot 3 and 360 in lot 6.

Since this build transaction is going to make 240 of this finished good, there is insufficient quantity in lot 3. We could use lot 6.

If this transaction were created using lot 3, QuickBooks would give a warning message, but still allow the transaction.

The next post will examine ways to adjust quantities within lot numbers, setting warning messages for specific items, and reporting on lot number data.