We have spent the last week or so examining the sales tax capabilities of QuickBooks Online (QBO). One of those capabilities is to allow the creation of a sales tax rate that actually is a total of several rates.

Usually, a sales tax rate is made up of several components. States, counties, cities, and other jurisdictions may each have a claim on some piece of the sales tax ‘pie’. In some states the entire amount is remitted to one taxing agency. That agency then, takes responsibility to divvy up the total amount to the respective small, local government organizations.

In other states though, the different amounts must be paid directly to the individual designated recipients of the funds.

Let’s look at an example.

Above is a screenshot of the list of sales tax rates in the QBO sample file. You can access this list from the Sales Tax Center by using the link “Add/edit tax rates and agencies.”

Note that the Tucson sales tax rate is a Combined Rate. That is, it is a combination of two component taxes. AZ State tax and Tucson City. Together, these two rates total the 9.1% sales tax rate charged within the city of Tucson in Arizona.

To further illustrate this, let’s create our own fictional state and city and create a combined tax rate. 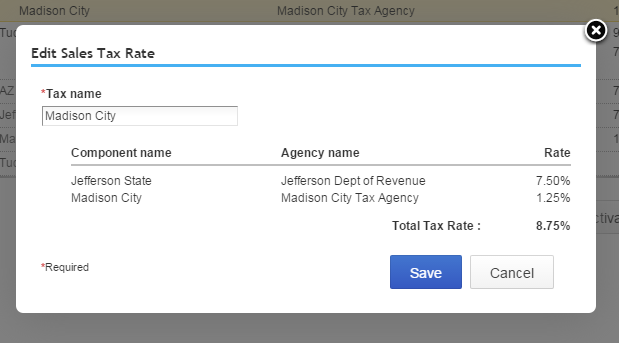 When creating a new tax rate in QBO, you have the option of a single rate or a combined rate. If you choose combined rate, you will have space to specify the component rates and agencies that make up the total tax rate.

You can see that in the above screenshot. The component rates are for Jefferson State and Madison City. Together, they make up the total sales tax rate of 8.75%.

This allows us to create an invoice for a Madison City customer and only need one sales tax rate for the invoice.

The above screenshot shows the invoice for our Madison City customer and the combined rate being charged.

When it’s time to create payments to sales tax agencies though, we need to be able to create separate checks. 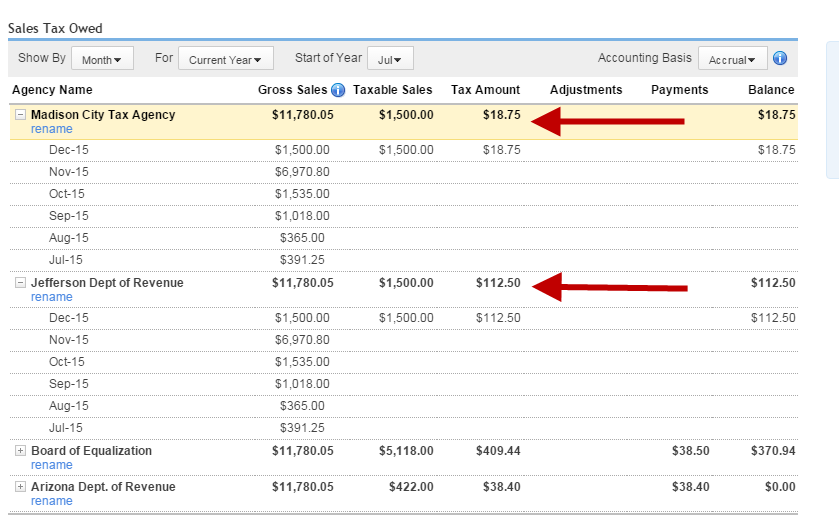 In the above graphic, you can see the two sections, one for Madison City Tax Agency and one for Jefferson Dept of Revenue. The correct amounts of tax are attributed to each, separate checks can be created to the two vendors.

While it is possible to create combined rates even when the amount is paid to only one vendor, it isn’t necessary. One could simply create the various single rate items for the different cities and jurisdictions needed.