Home » Why Use Accounts Payable

Why Use Accounts Payable

We are still studying QuickBooks Online (QBO) in our blog posts. So, while whether or not to use Accounts Payable is an accounting topic, we’ll be using QBO to demonstrate our options.

On the other hand, creating a check transaction in QBO is only one step. Create the check either on a check form or in the register.

So what’s the difference? Why go to the extra work?

In our sample QBO file, let’s create a job for Craig’s Design and Landscaping Services. In this job, he’ll use a couple of subcontractors and incur a number of expenses. He will invoice the customer at the end of the job.

He has thirty day terms with his subs and suppliers. He’ll write a check for them when the bill comes due. A pretty normal scenario.

Craig completes the job in January. He invoices his customer on the last day of the month.

So, as he does at the end of each month, Craig reviews a profit and loss report for his business for the previous month.

Wow! Over a nine thousand dollar profit. That’s pretty exciting, but what caused it? How can he duplicate this in the future? 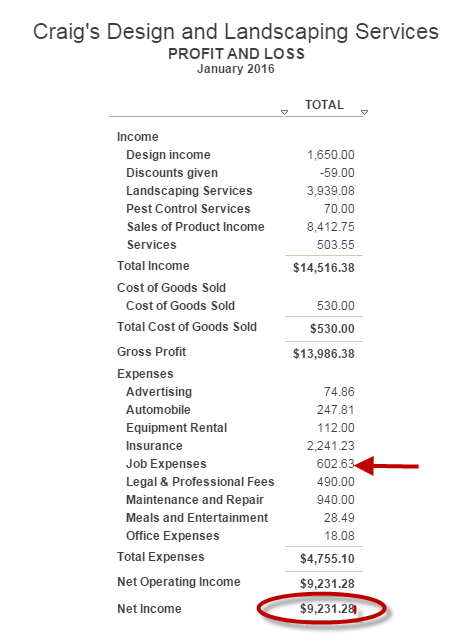 Craig has a wise accountant. He reviews his business operations with his accountant often. The question the accountant has is, how did you do that big job with only $600 in job expenses?

Craig knows he didn’t. But, he tells the accountant; those checks won’t be created until February. Well then, how does February look now? 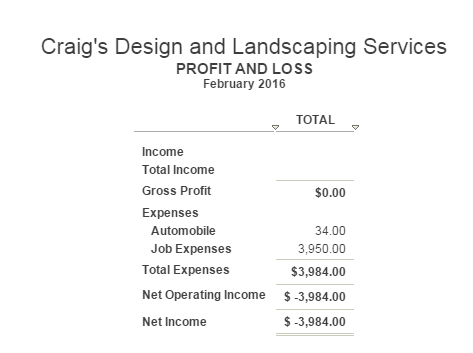 We’re only a few days into February so these numbers will change. But, the accountant points out that Craig is starting off with a $4000 loss. It will be difficult to overcome that.

Why the loss? The revenues from the big job are posted in January. The costs in February.

By creating Bills for the expenses, Craig can still pay them in February. But, the expenses can record in January, matched to the revenue of the job.

Let’s see how the profit and loss looks after the job expenses are created as bills and dated in January. 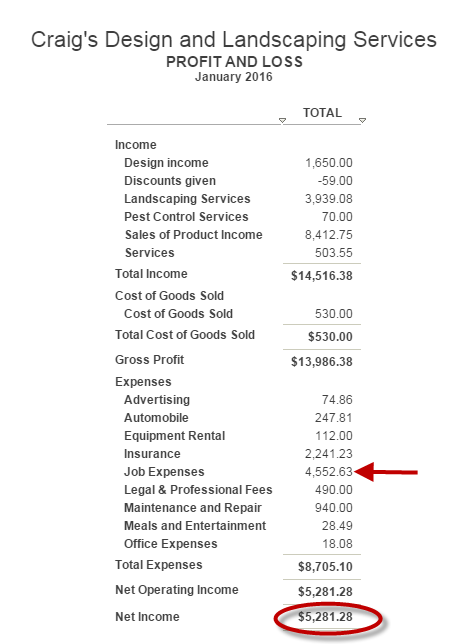 Revenue remains the same at about $14,500. But expenses are up. This is because we see a much more reasonable number for job expenses.

Most important, these numbers are much more real than what Craig saw before. By using accounts payable, he was able to post both the expense and the revenue for the job in the same month. This gives him a truer picture of whether his business makes money or not.

More on the details of using accounts payable in future posts. This article shows you the big picture. Why it is sometimes an important feature to use.